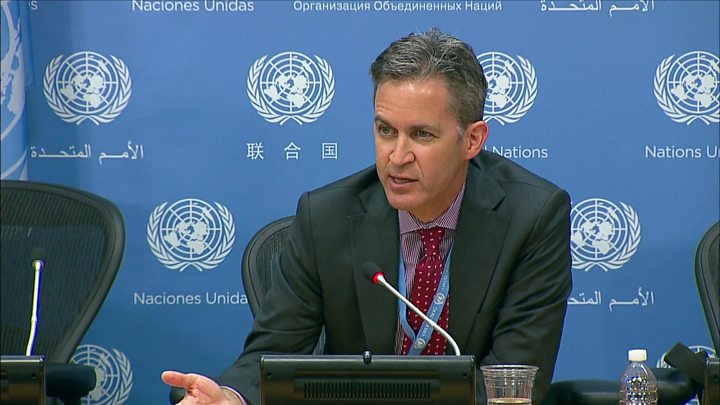 David Kaye, the special rapporteur on freedom of opinion and expression, confirmed he had received a complaint from the BBC about their treatment.

It came after Iran initiated a criminal investigation into 150 BBC staff, former staff and contributors for "conspiracy against national security".

A subsequent court order froze the assets of the 150 staff involved.

That means they cannot inherit family assets and prevents them and their families from selling property or cars.

BBC Persian broadcasts news from London on TV, radio and online. It reaches an estimated audience of 18 million every week despite being banned in Iran.

In a statement issued on Wednesday, the BBC said its BBC Persian staff and people associated with them had been subjected to a "sustained campaign of harassment and persecution" since the disputed 2009 presidential election, when the Iranian government accused foreign powers of interference. Examples it cited included:

The BBC complaint to the UN cites what it describes as numerous severe breaches of Iranian obligations under various international treaties to which it is signatory.

'Darkest period of our lives'

It took three months before we found out how long the travel ban was going to last. My parents spent many days in the courthouse, trying to get an answer to no avail. It was only after my mother passed out at the gates that the judge's secretary felt sorry for them and arranged a meeting.

The judge told my father that my work as a journalist for the BBC was the reason why my parents were banned from leaving Iran. He added that, as my parents, they had the power to stop me – which they obviously did not.

The travel ban was lifted a year later. But it took a long time to recover from the darkest period of our lives.

"This is an unprecedented collective punishment of journalists who are simply doing their jobs. This is not just a campaign against BBC Persian staff but against fundamental human rights, and the BBC calls on the government of Iran to end this legal action immediately," Lord Hall said.

"The BBC, on behalf of its staff, will use all available legal avenues to challenge this order and we call on the international community to use their own influence in Iran to persuade the authorities that this completely unacceptable treatment must end."

Mr Kaye later told reporters in New York that he was aware of the BBC's complaint and that he would discuss the allegations with Iranian officials.

"We urge the government of Iran to stop harassing the employees and families of employees of the BBC," he said.