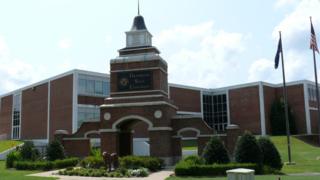 Two men have been shot dead on a university campus in the US state of Louisiana, police say.

They were fatally wounded in the courtyard of a dormitory at Grambling State University (GSU) following an altercation in a dorm room, according to university spokesman Will Sutton.

The victims, both 23, were named as Earl Andrews, a GSU student, and Monquiarious Caldwell, who did not attend the university.

The Lincoln Parish Sheriff's Department said it was assisting campus police with an investigation.