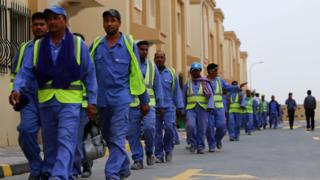 Qatar has committed to a range of labour law reforms, including the introduction of a minimum wage.

Doha's record on migrant worker rights has been under international scrutiny in the run-up to the 2022 football World Cup.

The announcement came the day before a meeting of the International Labour Organisation (ILO), which had warned Qatar to end abuse of migrant workers.

Its general secretary Sharan Burrow said the changes signalled the start of "real reforms" and "will bring to an end the use of modern slavery".

The ILO – a UN agency – had given Qatar a deadline of November to demonstrate progress on migrant workers' rights, and could open a rare formal investigation.

Its governing body is meeting in a plenary session between 26 October and 9 November.

Qatar has long operated on a system called "kafala", a strict work sponsorship scheme that forced foreign workers to get permission from their employer to change jobs, or even leave the country.

Qatari officials announced an end to the kafala system in December 2016, which was met with scepticism by rights group Amnesty International and others.

The ITUC said that the latest agreed reforms include:

Ms Burrow said that much still needed to be done, and the ITUC would be meeting with Qatar's labour minister to discuss the issues.

It is unclear when any or all of the proposed changes will come into effect.

There are an estimated 1.5 to 2 million migrant workers in Qatar, many of whom work in the construction industry and come from Asian countries.

A 2013 report from the ITUC said at least 1,200 migrant workers had died in the 2022 World Cup construction projects.

The number is difficult to verify, but a BBC analysis in 2015 suggested it could be even higher, and it also may have risen since.

IcetruckOctober 25, 2017
Like story:
tweet
10 Warning Signs That You’re Dealing With An Evil Person
10 Ways Your Smartphone Can Save Your Life