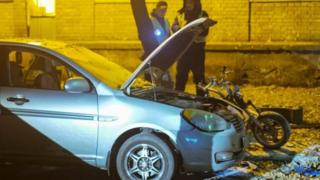 A blast in Ukraine's capital Kiev has killed a man and injured three others, including an MP, in what officials say may have been an assassination attempt.

A bodyguard of Ihor Mosiychuk, a lawmaker from the Radical Party, was killed, the organisation's head said.

The blast happened when Mr Mosiychuk and several other people were leaving the headquarters of a TV channel.

Initial results of an investigation suggest an explosive device had been placed on a motorcycle parked nearby.

No-one has so far said they were behind the blast.

Mr Mosiychuk is currently being treated in one of Kiev's hospitals.

He was seriously injured, but "will live", Radical Party leader Oleh Lyashko said.

He said he had no doubt that Mr Mosiychuk was attacked because of his political activities.

Among the injured was also a Ukrainian political analyst.

The Radical Party has 22 seats in parliament following elections in 2014. Initially a political ally of President Petro Poroshenko's party, it now positions itself as an opposition force.

Kiev has in recent years seen a number of deadly attacks on high-profile politicians and journalists.

In March, Denis Voronenkov, a former Russian MP who fled to Ukraine last year, was shot dead outside a hotel in the centre of the capital.

In July 2016, a prominent Belarusian journalist and Kremlin critic, Pavel Sheremet, was killed in a car bomb explosion.

Two years ago, Oles Buzyna, a Ukrainian journalist known for his pro-Russian views, was shot dead not far from his flat.