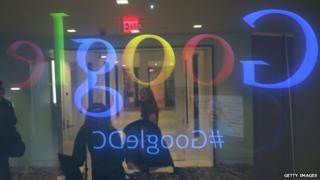 Tech giants Amazon and Google's parent Alphabet have posted a surge in sales over the last three months.

Shares in Alphabet jumped above $1,000 in after-hours trading after the company reported sales up 24% to $27.8bn.

Alphabet's profits for the three months to 30 September rose to $7.8bn, from $5.6bn for the same quarter last year.

The company's chief financial officer, Ruth Porat, said the firm was delighted with the way it was performing.

"We had a terrific quarter, with revenues up 24% year on year, reflecting strength across Google and Other Bets," she said.

"Our momentum is a result of investments over many years in fantastic people, products and partnerships."

Google continues to make up the vast majority of Alphabet's revenue and income. However the so-called Other Bets unit, which includes the Waymo driverless car business and the Project Loon WiFi-enabled weather balloon venture, saw revenue increase and losses fall.

YouTube continued to see "phenomenal growth", said Google chief executive Sundar Pichai in a conference call, with more than 1.5 billion people spending an average of an hour a day watching videos there on mobile devices, and surging use on television screens in homes.

Despite Amazon's sales growth, the firm's profits were nearly flat as it ploughed money into tech gadgets, streaming video, data centres and warehouses to support its growing empire.

Shares surged in after-hours trade anyway, as investors, who had been expecting a smaller number after being warned to expect the reinvestment, cheered the firm's growth prospects.

Chief executive Jeff Bezos said the Amazon sales increase was in part down to the growing demand for the firm's smart home products, which are powered by artificially intelligent assistant, Alexa.

Upmarket grocer Whole Foods, which Amazon acquired in August, brought in $1.3bn in sales in the quarter.

Sales were up 35% overall in North America, which accounts for the bulk of Amazon's business. They increased 29% in its international division thanks in part to a Prime Day surge, but the unit is still running at an operating loss.

The firm also said it now has nearly 542,000 full and part-time staff, including workers from Whole Foods. It continues to look at ways to expand its physical stores as well.

Microsoft said it earned revenue of $24.5bn in the three months to end-September, up 12% year-on-year.

Microsoft said growth was driven in part by its cloud computing products, which it has focused on in a bid to be less reliant on computer sales and older software.

Amy Hood, executive vice-president and chief financial officer at Microsoft, called it a "strong start" to the year.

The firm reported $6.9bn in revenue from its intelligent cloud unit, up 14% year-on-year.

Its productivity and business processes division, which includes sales from Office 365, reported $8.2bn in revenue, up 28%.

A fourth tech company, Intel, also posted a jump in revenues and profit. The world's largest computer chip maker said revenue rose 2% during the quarter to $16.1bn, with net income up 34% to $4.52bn.