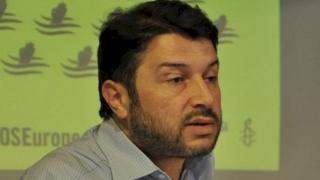 The indicted head of Amnesty International in Turkey, Taner Kilic, has denied alleged membership of the "terrorist" group blamed for the July 2016 coup attempt.

Mr Kilic was speaking at the opening of his trial in Izmir, western Turkey.

He has been in custody since June, accused of links to Fethullah Gulen, the US-based Muslim cleric seen by President Erdogan as a subversive traitor.

Eight other human rights activists were released on bail on Wednesday.

Mr Kilic is also a defendant in that separate case, in which activists face similar terrorism charges.

Amnesty says the charges are politically motivated – an attempt to silence critics of President Recep Tayyip Erdogan, who has cracked down hard on opponents since the coup attempt.

"There are inconcrete and unclear accusations in the indictment, and there is no concrete evidence" to prove any links to Mr Gulen, Mr Kilic was quoted as saying.

He said the authorities' statements had violated his right to a fair trial and presumption of innocence.

Mr Gulen has denied any role in the coup plot, which was led by rogue military officers.

Mr Kilic's denial was tweeted by Amnesty's Turkey researcher Andrew Gardner, who quoted him as saying two forensic reports found no trace of ByLock ever having been downloaded on his phone.

He and the other activists face up to 15 years in prison if found guilty.

In Wednesday's separate trial, eight defendants were freed on bail, while two others had been released earlier. Mr Kilic is the 11th defendant in that case. The next court hearing is scheduled for 22 November.

Turkey is still ruled under the state of emergency imposed after the failed coup attempt.