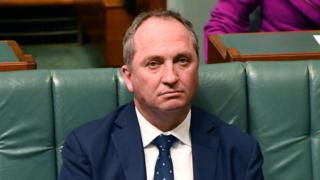 Australia's deputy prime minister and six other politicians will soon learn if they were wrongly elected because they held dual citizenship.

The decision will clarify the definition of rules prohibiting dual citizens from standing for office.

If Deputy PM Barnaby Joyce is ruled ineligible, it could threaten the government's one-seat majority.

In that event, Mr Joyce, who renounced New Zealand citizenship in August, has pledged to re-contest his lower house seat in a probable by-election.

Ms Waters and Mr Ludlam have already resigned over the saga, while Mr Xenophon has said he will quit regardless of the verdict to pursue other ambitions.

Prime Minister Malcolm Turnbull would face a tougher task of passing legislation if he lost his 76-seat majority in the 150-member House of Representatives.

The dual citizenship saga has dominated Australian politics since July, prompting dozens of MPs to publicly clarify their status.