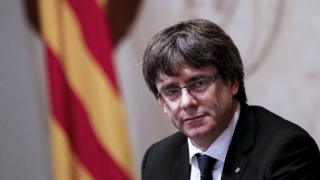 Catalonia's leader has ruled out early elections as a way to resolve the crisis over his regional government's drive for independence from Spain.

Speaking in Barcelona, Carles Puigdemont said it was up to the regional parliament to decide.

The Spanish government plans to strip Mr Puigdemont of his powers and curtail parliament's functions.

Mr Puigdemont declared independence after a referendum on 1 October, which was ruled illegal by Spain's constitutional court. But the Catalan leader immediately suspended implementation, calling for talks.

The Spanish Senate is set to vote on triggering Article 155 on Friday.

Large crowds gathered outside the regional government building ahead of Mr Puigdemont's much-anticipated statement, with many hoping that he would declare independence.

Student pro-independence protestors outside #catalonia government offices shouting: the streets will always be ours! pic.twitter.com/RtXGo2DFel

There had also been speculation that he might suspend the drive for independence and call regional elections in a effort to avoid direct rule from Madrid.

But Mr Puigdemont did neither, and said it was up to the regional parliament to decide on the consequences of article 155 being implemented.

Local media say that his coalition of pro-independence groups is under strain. A spokesman for ERC, a Catalan separatist party, had threatened to withdraw its support for Mr Puigdemont if he called a snap election.

The Catalan government said that of the 43% who took part in the 1 October referendum, 90% were in favour of independence.

On Wednesday Mr Puigdemont sent a letter to the Spanish Senate arguing that the central government's plan to intervene in Catalonia's autonomy was unconstitutional.