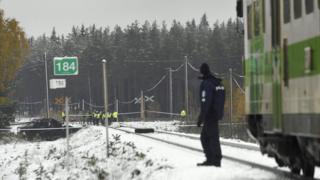 Four people were killed when a train and an army lorry collided in woodland near Raasepori in southern Finland.

Three of the dead were army conscripts and one was a passenger on the train, officials said.

The crash happened at a level crossing, and the reason is not yet clear. The lorry was on a military exercise.

At least seven people were injured and some have been sent to a Helsinki hospital. Raasepori – or Raseborg – is a small coastal town west of Helsinki.