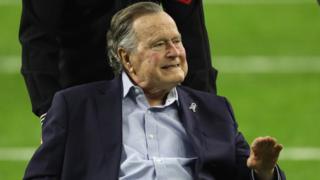 Former US President George Bush Senior has issued a second apology to "anyone he has offended" after a second allegation of sexual assault emerged.

Actress Jordana Grolnick told US website Deadspin Mr Bush groped her in 2016 after announcing his favourite magician was "David Cop-a-Feel".

Another actress, Heather Lind, had already come forward to say the former president had "touched me from behind".

Mr Bush's spokesman said it was supposed to put people "at ease".

"At age 93, President Bush has been confined to a wheelchair for roughly five years, so his arm falls on the lower waist of people with whom he takes pictures," the spokesman said in a statement supplied to media outlets.

"To try to put people at ease, the president routinely tells the same joke – and on occasion, he has patted women's rears in what he intended to be a good-natured manner.

"Some have seen it as innocent; others clearly view it as inappropriate. To anyone he has offended, President Bush apologises most sincerely."

The picture, taken during the interval of a play Ms Grolnick was performing in, appears to show Mr Bush's hand on her bottom.

She told Deadspin: "He reached his right hand around to my behind, and as we smiled for the photo he asked the group, 'Do you want to know who my favourite magician is?'

Ms Lind made a similar allegation against Mr Bush, who served one term as president starting in 1989, saying he had "touched me from behind from his wheelchair" and told a "dirty joke" while posing for a photo in an Instagram post which has since been deleted.

The incident allegedly took place during an event in 2014 for the television show Turn: Washington's Spies, in which Ms Lind is one of the main cast members.

Ms Lind finished her post with the hashtag #metoo, which has seen widespread use by victims of sexual assault to share their experiences in the wake of the Harvey Weinstein Hollywood scandal.

In his initial apology, Mr Bush's spokesman said the wheelchair-bound former president "most sincerely apologises if his attempt at humour offended Ms Lind".

Mr Bush, the father of George W Bush, who served two terms in the office between 2001 and 2009, suffers from a form of Parkinson's disease.