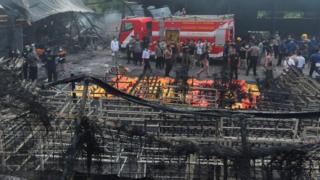 At least 23 people have been killed and dozens injured after an explosion and fire at an Indonesian fireworks factory, police say.

The blaze has been brought under control, but the exact number of casualties is still being confirmed.

"There are 103 workers in total working for this factory," Nico Afinta, director of general crime at Jakarta Police, told Indonesia's Kompas TV.

He said 43 people had been injured and were being treated in three hospitals, and that the remains of 23 victims had been found.

Parts of the building collapsed after the fire swept through, and nearby cars were burned out.