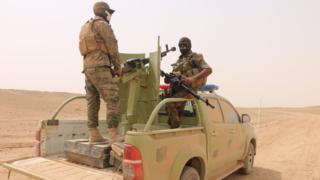 Iraqi forces launch assault on last IS bastion of al-Qaim

Iraqi forces have launched an offensive to recapture the last bastion of so-called Islamic State in the country.

Soldiers, police, Sunni tribesmen and mostly Shia paramilitary fighters are taking part in the assault on al-Qaim and Rawa, in the Euphrates river valley close to the border with Syria.

The prime minister told IS militants to "choose between death and surrender".

The jihadists still control part of the Euphrates valley in the neighbouring Syrian province of Deir al-Zour.

But they are under pressure there from Syrian pro-government forces and a US-backed alliance of Kurdish and Arab fighters who recently took the city of Raqqa.

"The heroic legions are advancing into the last den of terrorism in Iraq to liberate al-Qaim, Rawa and the surrounding villages and hamlets," Iraqi Prime Minister Haider al-Abadi said in a statement on Thursday morning.

"They will all return to the arms of the motherland thanks to the determination and endurance of our fighting heroes," he added.

On Wednesday, Iraqi military planes dropped leaflets over the area telling people to "go to any house on top of which a white flag has been raised when the liberation forces enter al-Qaim".

The US-led multinational coalition providing air and ground support for the offensive said 1,500 IS fighters were estimated to be in the vicinity of al-Qaim.

Al-Qaim, about 315km (195 miles) north-west of Baghdad, Rawa and the nearby Syrian border town of Albu Kamal are of strategic importance to IS as the group used routes through them to transfer fighters, weapons and goods.

The towns are also symbolically important because they made up IS's self-styled, cross-border "Euphrates Province", which was a symbol of the group's intention to eradicate all the region's frontiers and lay to rest the 1916 Sykes-Picot agreement.

An estimated 50,000 people are still living in al-Qaim and Rawa, according to the United Nations, while 63,500 have fled since January – mostly children, women and older people.

UN officials said on 1 October that people fleeing reported that conditions in IS-held areas were becoming critical. Food was increasingly scarce, and drinking water was being drawn directly from the River Euphrates and not treated before use, causing illnesses, they said.

The Norwegian Refugee Council said more than 10,000 had arrived at camps close to the provincial capital Ramadi since the start of the month.

It reported that staff had heard accounts of forced recruitment by IS of boys as young as 11, food shortages and widespread human rights violations.

"We didn't make it to this place without seeing death with our own eyes a thousand times," Nafa Yacob, who paid up to $400 to smugglers for a safe passage out of al-Qaim for his 13 family members two months ago, was quoted as saying.

The Norwegian Refugee Council is providing food, water, basic hygiene and household supplies at the camps, but it warned that people were desperately short of assistance due to a lack of resources.

Only 62% of the UN Humanitarian Response Plan for Iraq has found funding.