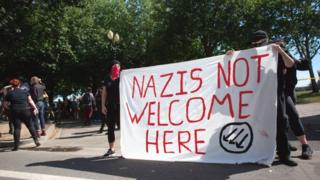 Reddit's new policy says: "Do not post content that encourages, glorifies, incites, or calls for violence or physical harm against an individual or a group of people."

One legal expert has said the policy may be difficult to enforce.

The updated policy notes that violent content may sometimes be posted as part of educational, newsworthy or artistic material but adds that the context and reason for posting such content should be made clear.

Material that glorifies or encourages the abuse of animals, such as bestiality, is also now being removed.

In 2015, Reddit updated its policy to deter harassment – a move that resulted in the shutting down of forums including r/fatpeoplehate.

However, Reddit has sometimes allowed material that would commonly be banned on mainstream social media sites.

The new crackdown suggests the site is trying to position itself as a more mainstream business, said legal expert Prof Eric Heinze of Queen Mary, University of London.

As companies grow, "they start caring about social norms, they care about PR, regardless of whether they had a more maverick origin," he told the BBC.

"Instead of a gross attack against black people, for example, it'll just be things about 'preserving our identity'. They find a coded speech that everyone understands," he said.

But there is evidence that bans can dissuade explicit hate speech, according to Bharath Ganesh at the Oxford Internet Institute.

"I have been reviewing some [unpublished] research on whether or not these [Reddit] bans make a difference," he said.

"The researchers found that there was a reduction in terms of hate speech overall [on the site]," he told the BBC. "So in that sense it was an effective move."

In August, a neo-Nazi and white supremacist website called The Daily Stormer was rejected by several web companies and was forced to move to the dark web.

This treatment was later criticised by civil liberties group the Electronic Frontier Foundation (EFF), which said it believed "no-one" should decide who is able to speak or not, including the government and private companies.