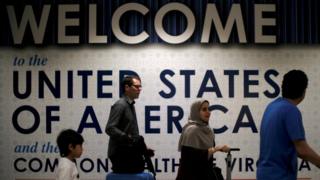 New security measures affecting flights into the US are coming into effect, which US authorities say are aimed at reducing the threat of hidden explosives.

They include enhanced screening of passengers and electronic devices.

About 2,000 commercial flights a day from more than 100 countries will be affected.

Some airline officials have expressed concern that the checks could cause delays and lead to higher prices.

The measures apply to all commercial flights into the US, the Department of Homeland Security says.

They replace a ban on laptops in airline cabin baggage from eight predominantly-Muslim countries which the US government announced in March but later dropped.

The ban was prompted by fears that terrorists could hide a bomb inside a laptop computer.

The new measures could include short security interviews with passengers at check-in or the boarding gate, airlines say.

Hong Kong-based airline Cathay Pacific said it would suspend its city check in and self bag-drop services and advised travellers to arrive at the airport three hours before departure.

The US is currently enforcing a travel ban on some people from eight countries – Iran, Libya, Syria, Yemen, Somalia, North Korea, Venezuela and Chad. However Sudan has been removed from the ban.

The restrictions on Venezuelans apply only to government officials and their family members.

IcetruckOctober 26, 2017
Like story:
tweet
Piccadilly Circus lights switched back on after renovations
Deaths in Finland train and army lorry crash