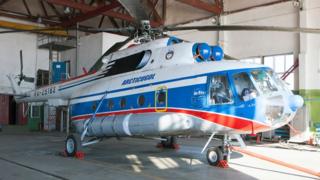 Rescuers are trying to find a Russian Mi-8 civilian helicopter that crashed into the sea with eight people on board in the Arctic archipelago of Svalbard.

Norway has sovereignty over Svalbard but Russia has a small coal-mining community in Barentsburg. The crash happened a few kilometres from there.

Russia's consul there said five crew and three scientists were on board, all Russians. They are feared dead.

It was on a short flight to Barentsburg from Pyramiden, a disused Russian mining settlement. The helicopter is operated by a Russian coal-mining enterprise, Arktikugol.