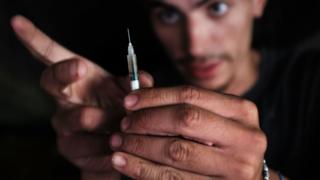 Mr Trump will announce a plan to target the abuse of opioids, which kill more than 140 Americans each day, in an address at the White House.

The president has previously promised to declare a national emergency, which would have triggered federal funding to help states combat the drug epidemic.

Mr Trump will sign a presidential memorandum on Thursday directing his acting health secretary to declare a nationwide public health emergency and ordering all federal agencies to take measures to reduce the number of opioid deaths, according to senior White House officials.

Proponents suggest Mr Trump's announcement is a critical step in raising awareness about the nationwide epidemic while some critics argue the move does not go far enough.

Addiction to painkillers and heroin, has blighted so many communities across the US – both urban and rural.

Health Secretary Tom Price also resigned last month after it was revealed he was using expensive private planes for official business, at a cost of $400,000 (£300,000) to taxpayers.