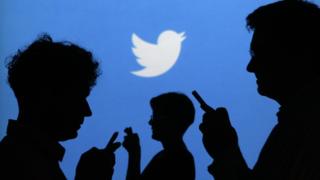 Twitter said it may turn a profit in the fourth quarter as the tech company narrowed its losses and added users.

The firm, which has not posted a profit since going public four years ago, said its losses narrowed from $103m (£78m) to $21m in the third quarter.

The number of monthly active users grew by four million to a total of 330 million at the end of September.

Twitter said its revenue reached $590m, a 4% decrease compared with the same period in 2016.

The social media company, which faces intense competition from the likes of Facebook and Instagram, said it had previously mis-stated the number of users, as it "had included users of certain third-party applications".

It revised those figures down by two million users in the second quarter.

"This quarter, we made progress in three key areas of our business," Twitter chief executive Jack Dorsey said.

"We grew our audience and engagement, made progress on a return to revenue growth, and achieved record profitability."

The numbers come as Twitter ramps up efforts to boost engagement, following mounting criticism that it is not doing enough to tackle abuse on the social network and that its ads platform was misused.

Twitter has also been focusing on boosting engagement through video and live events.

Many social platforms are adding millions a day by comparison and "Twitter is done growing," said Ross Gerber, chief executive of investment management firm Gerber Kawasaki. Video has not made much of a difference and its ad platform has made little progress, he added.