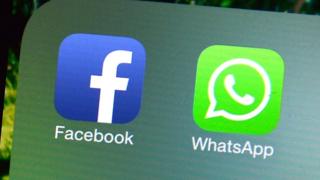 WhatsApp and Facebook will be scrutinised by a data protection taskforce, after they were accused of "non-compliance" with EU laws.

A group of watchdogs and regulators from EU nations, known as the Article 29 Data Protection Working Party, said WhatsApp had not fixed issues raised.

Facebook bought the messaging app in 2014 and pledged to keep it independent from its social network.

However, in August 2016, it announced plans to share user data with its parent company to offer up "friend suggestions" and "more relevant ads".

At the time, the move was criticised by the UK's Information Commissioner Elizabeth Denham, who said she did not believe the firm had obtained valid consent from its users.

In its newest letter to WhatsApp chief executive Jan Koum, the Working Party said "the information presented to users was seriously deficient as a means to inform their consent".

Both Facebook and WhatsApp have been invited to meet with the taskforce, which will be led by the UK's information commissioner.