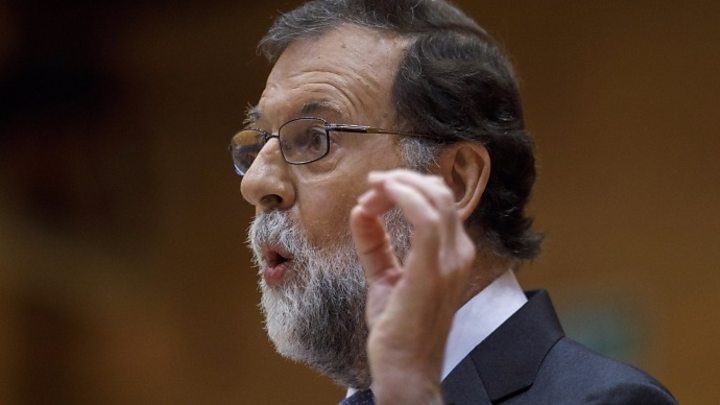 Spanish Prime Minister Mariano Rajoy has called on senators to approve direct rule over Catalonia, amid an escalating crisis over the region's push for independence.

He said he wanted to dismiss Catalan leader Carles Puigdemont, his vice-president and all regional ministers.

Mr Rajoy's speech was met with applause in the Spanish senate, where his Partido Popular has a majority.

Earlier this month Catalonia held a disputed referendum on the issue.

Mr Rajoy said he was calling for exceptional measures because there was no other choice and said "law, democracy and stability" needed to be returned to Catalonia.

He accused the Catalan government of dividing families and fracturing society. Many people had already suffered too much, he said, and the uncertainty was driving businesses out of the region.

"The thing that Catalans need protecting from is not what they're calling Spanish imperialism, but a minority who, in an intolerant way, declare themselves the owners of Catalonia and consider as exclusive a history, culture and feelings that are the heritage of the community," he said.

Article 155 of the Spanish constitution empowers the government to take "all measures necessary to compel" a region in case of a crisis.

It would enable Madrid to take control of Catalonia's finances, police and public media.

The Senate is expected to back his proposals, which also have the support of opposition parties. The Catalan parliament could respond by declaring independence unilaterally.

However both bodies have allowed for further debate on Saturday.

What is the Catalan parliament debating?

On Thursday the Catalan parliament began discussions over a possible declaration of independence.

It came after Catalan leader Carles Puigdemont failed to reveal a favoured course of action, and called on MPs to decide on a response.

Mr Puigdemont signed a declaration of independence following the 1 October vote, but immediately halted implementation and called for negotiations between Catalonia and the Spanish government.

But the Constitutional Court ruled it was illegal.

During Thursday's Catalan parliamentary session, a government spokesman said a proposal to implement the results of a referendum on independence would be submitted to lawmakers on Friday.

Hardline separatists continued their calls for an official declaration of independence.

"We will continue on the path to a Catalan republic," said an MP for the far-left CUP, which provides key support for the pro-independence governing coalition.

But Ines Arrimadas, leader of the anti-independence Citizens's Party, accused Mr Puigdemont of missing countless opportunities to resolve the crisis through negotiation.

Adding fuel to the fire

Article 155 of Spain's 1978 constitution has never been used before in democratic Spain. And for good reason.

But on Friday the Spanish Senate is expected to vote in favour of triggering Article 155 and stripping the region of Catalonia of its autonomous powers.

The move is the only way, the Spanish government insists, to calm the Catalan crisis.

But Catalan leaders say such a move will simply add fuel to the fire – making it more likely that Friday will be the day that they officially declare an independent Catalan republic.

More on the Catalan crisis