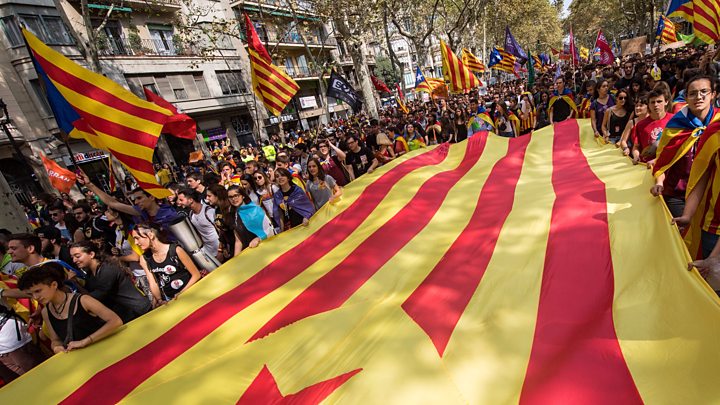 The Spanish Senate is due to discuss a plan by the Madrid government to take over some of Catalonia's autonomous powers, amid an escalating crisis over the region's push for independence.

Earlier this month Catalonia held a disputed referendum on the issue.

The Senate is expected to pass the emergency measures, which include sacking the Catalan president.

Meanwhile the regional parliament has been debating a possible declaration of independence.

The debate began on Thursday, after Catalan President Carles Puigdemont failed to reveal a favoured course of action, and called on MPs to decide on a response.

Mr Puigdemont signed a declaration of independence following the 1 October vote, but immediately halted implementation and called for negotiations between Catalonia and the Spanish government.

However, the Constitutional Court ruled it was illegal.

How did Thursday's debate unfold?

During Thursday's Catalan parliamentary session, a government spokesman said a proposal to implement the results of a referendum on independence would be submitted to lawmakers on Friday.

Hard-line separatists continued their calls for an official declaration of independence.

"We will continue on the path to a Catalan republic," an MP for the far-left CUP, which provides key support for the pro-independence governing coalition, said.

But Ines Arrimadas, leader of the anti-independence Citizens's Party, accused Mr Puigdemont of missing countless opportunities to resolve the crisis through negotiation.

What will happen in the Spanish Senate on Friday?

The Senate is due to hold a vote on the government's plan to trigger Article 155 of the Spanish constitution, which empowers the government to take "all measures necessary to compel" a region in case of a crisis.

The article has never been used before.

Under the proposals announced by Prime Minister Mariano Rajoy this week, Mr Puigdemont would be removed and new regional elections held. Madrid would take control of Catalonia's finances, police and public media.

Mr Rajoy's centre-right government has a majority in the Senate. The plan has also been approved by opposition parties.

Adding fuel to the fire

Article 155 of Spain's 1978 constitution has never been used before in democratic Spain. And for good reason.

But on Friday the Spanish Senate is expected to vote in favour of triggering Article 155 and stripping the region of Catalonia of its autonomous powers.

The move is the only way, the Spanish government insists, to calm the Catalan crisis.

But Catalan leaders say such a move will simply add fuel to the fire – making it more likely that Friday will be the day that they officially declare an independent Catalan republic.

More on the Catalan crisis