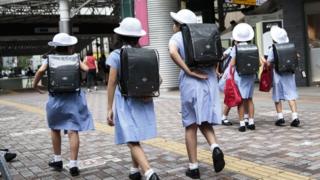 An 18-year-old Japanese girl is suing her local government after her school made her repeatedly dye her naturally-brown hair black, media reports say.

The girl says she was told she would have to leave the high school near Osaka if she did not comply with a rule requiring students' hair to be black.

It is being reported that she says the dye damaged her hair and her scalp.

Kaifukan high school said its policy was to ban students from dyeing or bleaching hair.

The school's instruction to the girl to dye her hair was reportedly despite her mother telling the school that she was born with brownish hair.

Reports say the girl has not attended school since September last year.

Kaifukan's headteacher Masahiko Takahashi did not comment on the lawsuit.

Many Japanese schools have strict rules about appearance, including hair colour, the use of make up and the length of skirts.

Earlier this year a survey by the Asahi Shimbun newspaper found that nearly 60% of high schools in the capital Tokyo asked students with light-coloured hair for proof that this was natural, for example by providing photographs of them as infants.

The newspaper said that discipline was seen as a strong selling point for schools amid growing competition to attract new students given the country's declining birth rate.