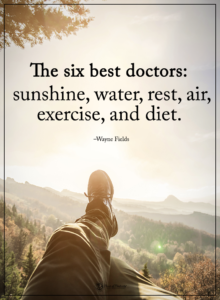 Japan and Italy, what’s your secret?

All you can eat sushi and pasta? (“Please God…”)

On a serious note, the Japanese and Italians dust the rest of the world in the proportionate number of persons aged 100 and older.

What’s truly incredible is that these numbers are expected to rise as much as ten-fold over the next 35 years, according to the United Nations’ “World Population Prospects, 2017” report.

Okay, so there may come a time (in the not so distant future, perhaps) when we can alter our genes at-will.

That said, genes play a role in how long you’ll live. People who’ve reached a hundred are more likely than the rest of the population to have ancestors who lived for a long time.

Increasingly, however, lifestyle factors – in conjunction with scientific and medical advances – are playing a more prominent role in living a longer life.

Per science, here are five lifestyle factors popular among centenarians:

1. Have a positive attitude

We know for a fact that stress is a common denominator for many (most?) serious illnesses. The best stress-buster is a positive state of mind, which is perhaps the most crucial factor to living a long and healthy life.

Lynn Peters-Adler, J.D., a contributor to Next Avenue and Forbes writes:

“Almost all of the centenarians we spoke to believe a positive yet realistic attitude is critical throughout one’s life and described themselves as optimistic people.”

2. Keep a sense of humor

Emiliano Mercado Del Toro, 115 years old, has never failed to maintain his sense of humor – even when the bullets began to fly. Del Toro claims that he was visiting a “dancing club” – a.k.a., a bordello – before he dived under upon hearing gunshots. At 82 years old.

When asked about what he was doing while table dwelling, Del Toro replied “Praying…or at least I was when the bullets started flying!”

John and Charlotte Henderson, 104 and 102, have been married for 77 years. Mr. Henderson is the University of Texas’ longest-living former football player, having played beginning as a freshman in 1932.

His wife adds her opinion: “We had such a good time when (he) retired. We traveled a lot. We just stay busy all of the time, and I’m sure that helps.”

Whether it’s reading the news, doing crossword puzzles, or playing cards, many seniors and centenarians prioritize keeping their mind active.

Dr. Henry Mahncke, CEO of Posit Science, who works with Bredesen’s patients, says: “There’s an emerging consensus that we need to treat neurodegenerative disorders with a (diverse) approach tailored to the individual, rather than a silver bullet.”

Harry Adler, 101, gives his straightforward and simple advice: “Just stay out of trouble.” Centenarians emphasize the importance of following your conscience and living clean.

According to a survey by Forbes: “almost 75 percent of the centenarians we surveyed never smoked; most of the others stopped between the ages of 40 and 70. And while some never drank, most said they enjoyed only an occasional cocktail or a glass of wine; some still do.”

The Japanese demonstrate the importance of proper dietary habits – a crucial factor to a long and healthy life.

In just over 70 years, Japan rose from having one of the world’s shortest life expectancies (post-WWII) to the highest. As we can’t list (or fully explain) all lifestyle components in a single article, here’s a quick list of what our Far Eastern friends do according to studies:

– Be more active. (As many Japanese do not drive, they must walk to the trains, work, and school.)

– Spend a lot of time in nature.

The culture of overwork, known as karoshi (“death from overwork) in Japanese, is a widely-recognized health crisis. Recently, a 31-year old journalist by the name of Miwa Sado died of heart failure after clocking more than 150 hours of overtime in one month.

In detailing health benefits of other cultures, of which there are many, it is only fair and just to include the elements of its culture that are counterproductive to health and happiness.

As of this writing, Japan’s federal government is working to implement federal laws to limit the hours that employees can work.

The post Researchers Reveal 5 Secrets of People Who Have Lived to Be 100 appeared first on Power of Positivity: Positive Thinking & Attitude.

IcetruckOctober 27, 2017
Like story:
tweet
Trump: Opioid ‘national shame’ a public health emergency
The robot that can swim and fly and other tech news