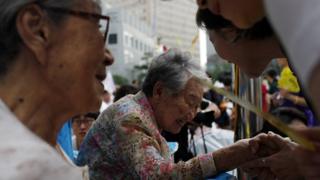 A South Korean court has found a university professor guilty of defamation for questioning accepted views on so-called comfort women.

The term is a euphemism for women who were forced to work in Japanese wartime military brothels.

Park Yu-ha, of Sejong University, suggested not all the women were coerced and some formed emotional bonds with soldiers.

Overturning an earlier verdict from a lower court that had acquitted her on the grounds of academic freedom, the high court said: "Park used definitive expressions in some parts of her book which could make readers think that… the victims voluntarily joined military brothels with an intention to sell sex.

"She inflicted (significant) mental stress on the victims by displaying distorted claims about those forced into sex slavery."

Surviving women had reacted angrily to Ms Park's 2013 book The Comfort Women of the Empire.

Tens of thousands of women from Korea – then a Japanese colony – as well as other parts of Asia were sent to military brothels for Japanese soldiers.

The question of how to remember them has plagued relations between Japan and South Korea, and many Koreans want to see compensation and apologies. A row broke out earlier this year over a statue commemorating the issue.