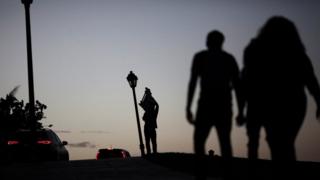 The White House has distanced itself from a $300m (£227m) contract awarded to tiny Montana firm to help reconstruct Puerto Rico's power grid.

The statement came as President Donald Trump met his Interior Secretary Ryan Zinke, who knows the chief executive of the company, Whitefish Energy.

Federal authorities have expressed "significant concerns" about the deal, and are reviewing the contract.

Some 75% of Puerto Ricans have no power five weeks after Hurricane Maria.

White House spokesman Raj Shah said on Friday: "Our understanding is the decision to give a contract to Whitefish Energy was made exclusively by Puerto Rico Electric Power Authority (Prepa).

"The White House is not aware of any federal involvement in the selection."

The US interior secretary – who has acknowledged knowing Whitefish's chief executive, but denies any involvement in the deal – met the president at the White House on Friday.

Prepa, the US territory's main utility, asserted that federal authorities had reviewed the deal.

But the US Federal Emergency Management Agency (Fema) denied that on Thursday night.

Among other clauses, the contract states that "Prepa hereby represents and warrants that Fema has reviewed and approved of this Contract".

It also says Fema "confirmed this Contract is in an acceptable form to qualify for funding from Fema or other US Governmental agencies".

In an email to reporters on Thursday night, Fema said "any language in any contract between Prepa and Whitefish that states Fema approved that contract is inaccurate".

Fema also said it "has significant concerns with how Prepa procured this contract and has not confirmed whether the contract prices are reasonable".

Its review is ongoing, but the disaster agency warned that contracts not in compliance with their regulations "risk not being reimbursed by Fema for their disaster costs".

It is unclear what would happen if Fema refused to pay.

Walt Green, a former director of the US National Center for Disaster Fraud, told BBC News: "It is impossible to say who is ultimately responsible for costs that are denied by Fema until much more information is known.

"Any dispute may result in appeals, administrative hearings and lawsuits."

They are now seeking to assure the public there is "nothing illegal" about the contract.

A major investor in the company was also found to have made donations to the Trump campaign and allied groups during the 2016 presidential race.

The investor did not return a BBC request for comment.

Questions have been raised about why a little-known, two-year old firm with no experience of work on this scale was awarded the contract so quickly.

Critics have also queried why Puerto Rican authorities did not seek aid from other public utility companies – as is custom during disasters.

On Friday, top Democrats from that committee and the Transportation and Infrastructure Committee sent a letter requesting the Department of Homeland Security's inspector general launch an investigation.

Puerto Rico Governor Ricardo Rossello said on Friday he is awaiting the results of an audit that he has ordered on the deal.