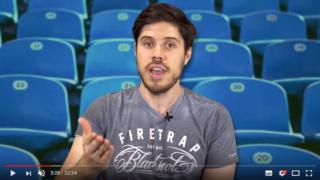 Adam Blampied, a prominent YouTube video blogger, has issued an apology for "manipulating" women into sending him images on social media.

"To everyone I've hurt… I'm so sorry," said the former What Culture employee in a statement on Wednesday.

He apologised to those women he repeatedly messaged and encouraged to "send me images of themselves".

Eleven minutes after the statement was released, an individual alleged Blampied asked her to "send him nudes".

Blampied presented videos for What Culture on YouTube until September 2017, when he parted company with the organisation. His new employers, Cultaholic, told the BBC he is unable to be reached for comment.

Peter Willis, Director of What Culture Limited, told the BBC Blampied's departure "was not linked to the series of Twitter messages that were published [on Wednesday], nor were we aware of any of the events within those tweets until reading Adam's own statement.

"What Culture categorically condemns all sexual harassment, predatory behaviour and abuses of position and power."

'In the end, I relented'

Shortly after Blampied's statement, an individual – @SRbackwards – alleged on Twitter the YouTuber asked her for nude images, calling him "a manipulative sexual predator".

"Knowing that I was 19, drunk, sexually inexperienced and had moral objections to sending him nudes, he continued to try to persuade me," they posted.

"In the end, I relented.

"He was charming, he was the face of a YouTube channel and I'd been a fan of him for a while."

Using strong language, she added: "He made me feel so good about myself for about six hours, then he made me feel like utter shit for months."

I just wanted you all to know, so that I never hurt anyone ever again. Please be kind and understanding to the women. More than I was.

Blampied has since made a string of comments on Twitter, urging his followers on Thursday: "Please don't attack the women for speaking out.

"They have been hurt, by me.

"Please don't publicly leap to my defence on this. My behaviour doesn't warrant it.

"The purpose of this was not to excuse myself, but because it's what the women deserve, for the wider public to see my behaviour.

"Please be kind and understanding to the women. More than I was."