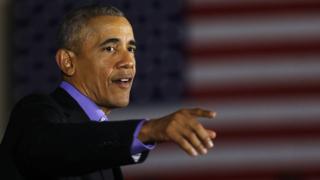 Former US president Barack Obama has been summoned for jury duty in the state of Illinois and is planning to serve, a court official says.

Details have not been released but he is expected to appear in Cook County next month.

Mr Obama, 56, owns a home in Washington DC and also in Chicago and could be called for civil or criminal cases.

Barack Obama went to Harvard Law School and lectured at the University of Chicago's law school for 12 years before he joined the Senate. He also worked as a civil rights lawyer.

"He made it crystal-clear to me through his representative that he would carry out his public duty as a citizen and resident of this community," Cook County Chief Judge Timothy Evans was quoted by the Chicago Tribune as saying.

Mr Evans said that the former president's security was a priority. A spokesman for Mr Obama has not commented.

If chosen, Mr Obama would not be the first high-profile person to appear on a jury in Cook County – celebrity Oprah Winfrey sat on a jury for a murder trial in 2004, NPR reports.