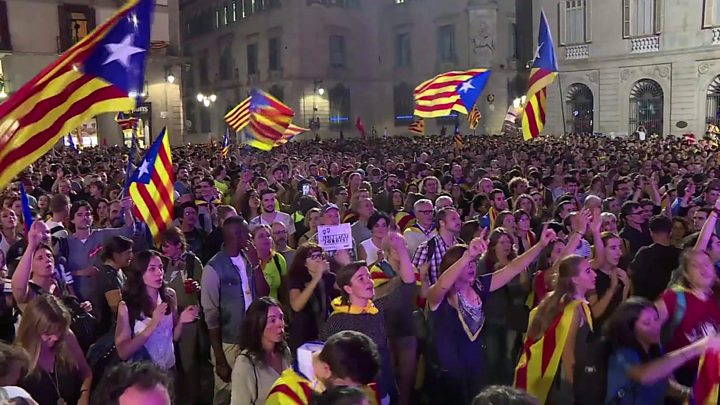 The Spanish government has stripped Catalonia's most senior police officials of their powers, hours after direct rule was imposed on the region.

This is the first specific measure taken since the Catalan parliament voted to declare independence.

PM Mariano Rajoy has also announced the dissolution of the regional parliament and the removal of the Catalan leader, and called for snap local elections.

Demonstrations for and against independence went on into the night.

More are expected on Saturday, with a rally "for the unity of Spain and the constitution" to be held in Madrid.

The crisis began when Catalan leaders held an independence referendum, defying a ruling by the Constitutional Court which had declared it illegal.

The Catalan government said that of the 43% of potential voters who took part, 90% were in favour of independence. Others boycotted the vote after the court ruling.

What steps is Spain taking?

On Friday the Spanish Senate granted Mr Rajoy's government the power to impose direct rule on Catalonia, and after an emergency cabinet meeting Mr Rajoy spelled out what that would entail.

Mr Trapero was already under investigation for sedition, accused of failing to help Spain's Guardia Civil police tackle thousands of pro-independence protesters in Barcelona during the run-up to the referendum.

Mr Rajoy said Mr Puigdemont and his cabinet would be sacked, the parliament dissolved and elections called.

"[Mr Puigdemont] had the opportunity to return to legality and to call elections," he said.

"It is what the majority of the Catalonian people asked for – but he didn't want to do it. So the government of Spain is taking the necessary measures to return to legality."

Regional elections are scheduled for 21 December.

Spain's prime minister may have hoped warning Catalonia against declaring independence would be enough. Now he has to follow through on his pledge to impose direct rule, knowing this is highly risky.

Mariano Rajoy argues that Catalan separatists left him no choice. He had to act, to return the region to "legality", as Madrid puts it. But actually doing that will be complex and highly fraught.

It's why Mr Rajoy called for calm in Spain, after the Catalan vote for independence. He is acting with broad, cross-party support though, and public backing.

Here in Madrid many people have begun flying the Spanish national flag from their windows and balconies, to show their support for keeping the country united.

There is some sympathy for the Catalan cause, mostly because of the police crackdown during the referendum. But far louder are calls to prosecute those pushing for independence. It's a move which many Spaniards, like their government, are convinced was illegal.

A motion declaring independence was approved on Friday with 70 in favour, 10 against, and two abstentions in the 135-seat chamber. Several opposition MPs boycotted the vote.

Mr Puigdemont has urged supporters to "maintain the momentum" in a peaceful manner.

Separatists say the move means they no longer fall under Spanish jurisdiction.

But the Spanish Constitutional Court is likely to declare it illegal, while the EU, the US, the UK, Germany and France all expressed support for Spanish unity.

Meanwhile Spanish prosecutors say they will file charges of "rebellion" against Mr Puigdemont next week.

As the outcome of the vote became clear, people popped open cava, the local sparkling wine.

The same crowds that cheered each Yes vote from Catalan MPs were reportedly booing Mr Rajoy as he made his announcement.

There have been pro-unity demonstrations too, with protesters in Barcelona waving Spanish flags and denouncing Catalan independence.