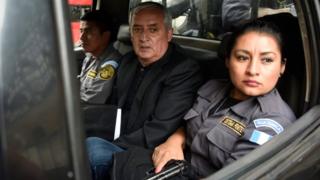 A judge in Guatemala has ruled that former president Otto Pérez Molina will stand trial for his alleged role in a huge corruption scheme involving the country's customs service.

The scandal prompted unprecedented mass street protests in Guatemala in 2015.

It led to the resignation and arrest of Mr Pérez Molina and former vice-president Roxana Baldetti.

They are accused of taking a cut from bribes channelled to officials helping businesses evade customs duties.

Both strongly deny the accusations.

The bribery scam has become known as "La Linea" or "The Line", after the hotline businesses allegedly rang to clear their imports through customs at cut-price rates.

'Neither corrupt, nor a thief'

Judge Miguel Ángel Gálvez, in Guatemala City, said that Mr Pérez Molina and Ms Baldetti were aware of the irregularities and received millions of dollars in bribes.

Another 26 people, including former senior officials from Guatemala's customs duty system, have also been charged and will face trial.

Mr Pérez Molina has been charged with racketeering, illicit enrichment and fraud.

He resigned in September 2015, at the end of his four-year term.

In the wake of the scandal, Guatemalans elected a former television comedian, Jimmy Morales, as their new president.

Mr Morales, who had never held public office, won the election with the slogan, "Neither corrupt, nor a thief".

Prosecutors in Washington DC accuse her of conspiring to import cocaine to the US between 2010 and 2015.