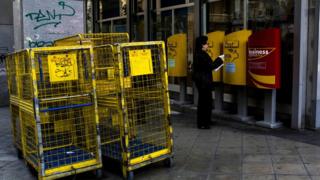 Greek police say they have arrested a man in Athens in connection with a series of letter bomb attacks on EU officials earlier this year.

Eight packages were intercepted in Athens in March after booby-trapped post was sent to the International Monetary Fund (IMF) in Paris and the German finance minister in Berlin.

Former Greek PM Lucas Papademos was then injured by a parcel-bomb in May.

A 29-year-old Greek man was arrested by anti-terror police on Saturday.

Police said in a statement that they were looking for other suspects in relation to the investigation.

It is not clear if the man is linked to the Greek far-left group Conspiracy of Fire Cells which said it was responsible for the device sent to German Finance Minister Wolfgang Schaeuble.

The group was previously responsible for a similar spate of letter-bombs sent to officials in 2010 which forced Greek authorities to temporarily suspend international post.

A number of the group's members were given heavy prison sentences in 2011.

The group emerged in 2008 during the height of Greece's financial crisis.

Ex-PM Papademos suffered minor injuries when he opened the explosive parcel in his car.

He served as prime minister between 2011-2012 when he oversaw a wave of controversial austerity measures aimed at securing a European bailout for the country.

He had previously served as the Governor of the Bank of Greece and vice-president of the European Central Bank.

The other packages intercepted at an Athens postal sorting centre were addressed to EU political figures including the European Economic Affairs Commissioner Pierre Moscovici.