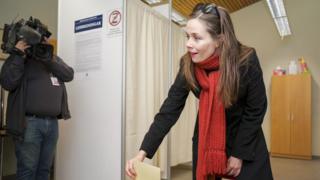 Polls have closed in Iceland where people voted for a new government after a scandal over a paedophile led to the collapse of the governing coalition.

The row erupted after it emerged that PM Bjarni Benediktsson's father had written a letter saying the paedophile should have his "honour restored".

Iceland's second snap election in a year comes amid deep voter distrust, despite a thriving economy.

Last year a tax haven scandal forced the then prime minister to resign.

Leaked information from Panama-based law firm Mossack Fonseca showed at the time that PM Sigmundur Gunnlaugsson owned an offshore company with his wife, but had not declared it.

Mr Gunnlaugsson has denied wrongdoing and is standing in the current election with his new Centre Party.

Opinion polls suggested Mr Benediktsson's centre-right Independence Party was slightly ahead of the Left-Green Movement, but both would have to rely on other parties to form a coalition.

Most of the parties say investment is needed in welfare, infrastructure and tourism but disagree about how to fund it.

The Left-Green movement, led by 41-year-old Katrín Jakobsdóttir, wants to use the country's economic boom to fund investment and restore trust in government.

The Independence Party has said it wants to fund infrastructure spending by taking money out of the banking sector.

It has been part of every ruling coalition since 1980, except during the 2009-2013 economic crisis years.

The Bright Future party said it was quitting the three-party coalition over the "serious breach of trust".

The island of 340,000 people was one of the countries hit hardest by the 2008 financial crisis but has turned its economy around by focussing on tourism.

IcetruckOctober 28, 2017
Like story:
tweet
Chimpanzees among 33 breeds selected for special protection
Barack Obama called for jury duty in Illinois and plans to serve