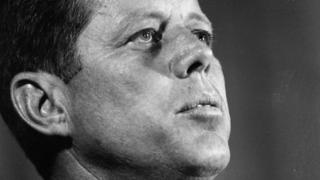 Thousands of previously classified documents relating to the assassination of President John F Kennedy in 1963 have been released by the US government.

Since the publication, President Donald Trump has said he will release all remaining files other than the names and addresses of anyone mentioned who is still living – some of the documents have been withheld at the request of government agencies.

As people examine all 2,800 files so far released, here are the most interesting points so far. NB many files contain unverified raw intelligence.

"The thing I am concerned about is having something issued so that we can convince the public that Oswald is the real assassin," he said.

Oswald spoke to a KGB officer

A memo from the CIA, based on an intercepted phone call, suggests Oswald spoke with a KGB officer at the Russian embassy in Mexico City.

It says that on 28 September 1963 he spoke with Valery Vladimirovich Kostikov, an "identified KGB officer" who worked for a department "responsible for sabotage and assassination".

Oswald later called the embassy and, in "broken Russian", asked if there was "anything new concerning the telegram to Washington".

Oswald, who shot and killed President Kennedy, was quickly arrested and charged. But two days later Oswald was shot dead in the basement of the Dallas police department by Jack Ruby, a local nightclub owner.

But could more have been done to protect him?

One memo reveals the FBI had warned Dallas police of a death threat made against Oswald.

FBI director J Edgar Hoover said: "We at once notified the chief of police and he assured us Oswald would be given sufficient protection. However, this was not done."

The idea of a leaderless United States did not appeal to some Soviet officials.

They "were fearful that without leadership, some irresponsible general in the United States might launch a missile at the Soviet Union", according to one memo.

It also says the Soviets were "convinced the assassination was not the deed of one man" but rather a "carefully planned campaign in which several people played a part".

The FBI warned the president's brother, US Attorney General Robert F Kennedy, his alleged affair with Marilyn Monroe would be exposed in a book.

A letter on 7 July 1964 from the bureau to the younger Kennedy said the paperback, The Strange Death of Marilyn Monroe, would allege he had "an intimate relationship with Miss Monroe".

According to the FBI, the author would suggest the film star "was led to believe his intentions were serious" and that RFK had promised to divorce his wife and marry the sex symbol.

But when he refused to do so, Monroe "threatened to expose their relationship" and ruin his presidential ambitions.

The FBI said the book would allege that RFK took "drastic action" by plotting to have Monroe killed and make it look like a suicide.

The letter advised RFK the book would also allege he was at her apartment on the night of her death.

Agents wrote that RFK "was actually in San Francisco with his wife at the time Marilyn Monroe committed suicide".

The actress died at the age of 36 in Los Angeles in August 1962 from a barbiturate overdose, according to the city coroner's office.

An FBI memo from before Kennedy was elected president describes attempts by a private detective to spy on the then senator.

The private detective also suggested equipping the woman with "a recording device" to take down any "indiscreet statements" from Senator Kennedy.

She refused, and said she was unaware of any "indiscretions".

One memo describes how a British local newspaper, the Cambridge News, received an anonymous call about "some big news" in the US, just 25 minutes before the assassination.

"The caller said only that the Cambridge News reporter should call the American embassy in London for some big news and then hung up", it says.

One document reveals an operation to assassinate top Cuban leaders and offers of up to $100,000 for "killing or delivering alive" government officials. But for Fidel Castro the payment offered was of only $0.02.

Another document, however, suggests that the price for killing Castro was $150,000 and that there were alleged contacts between Cuban exiles and the mafia.

Government ideas about how to kill Castro included contaminating Mr Castro's diving suit with disease-causing bacteria or poisoning his food.

Was a US president in the Ku Klux Klan?

An FBI report alleges that President Lyndon B Johnson, who took office after President Kennedy was killed, may have been a member of the KKK.

An informant said the white supremacist group had "documented proof that President Johnson was formerly a member of the Klan in Texas during the early days of his political career".

However, no proof was provided.