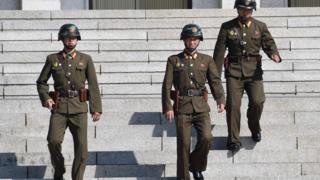 The threat of nuclear attack from North Korea is increasing, US Defence Secretary James Mattis said during a visit to South Korea.

Mr Mattis warned it would face a "massive military response" if it used nuclear weapons.

Separately, North Korea released a South Korean fishing boat which it said had been found in North Korean waters illegally.

The crew of 10 were released on Friday evening, South Korean officials said.

It comes at a time of heightened tension in the region, with both sides running a series of military exercises.

"North Korea has accelerated the threat that it poses to its neighbours and the world through its illegal and unnecessary missile and nuclear weapons programs," Mr Mattis said, AP news agency reported.

Washington could not accept a nuclear North Korea, he added, speaking alongside his South Korean counterpart Song Young-moo.

Mr Mattis is in Seoul for annual defence talks with South Korea.

US President Donald Trump is due to visit South Korea in November as part of a trip to Asia.

In September North Korea carried out its sixth nuclear test, which was its biggest yet.

The bomb was thought to have had a power range from 50 to 120 kilotonnes. A 50kt device would be about three times the size of the bomb that destroyed Hiroshima in 1945.

It has also carried out a series of missile tests, firing two ballistic missiles over Japan in August and September.

South Korea has begun deploying the US Thaad (Terminal High-Altitude Area Defence) missile defence system in response to the threat of a missile attack from the north.

The drills anger the North, and Pyongyang has in the past denounced them as a "rehearsal for war".

Separately, the US has imposed sanctions on seven North Koreans and three entities over "flagrant" human rights abuses.

Treasury secretary Steven Mnuchin said those sanctioned included diplomats placed in China and Vietnam who had taken part in the forced repatriation of North Korean asylum-seekers.