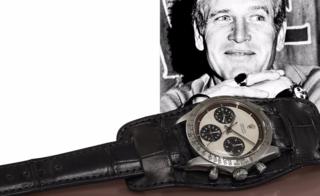 A Rolex watch belonging to the late Hollywood star Paul Newman has sold for a record price at auction in New York.

The watch was given to him by his wife Joanne Woodward as they filmed the 1969 movie Winning together.

The stainless steel watch was sold to an unnamed telephone buyer for $17.8m (£13.6m) – much more than the $1m it had initially been expected to fetch.

It is a record for a wristwatch sold at auction, but a Patek Philippe pocket watch sold for more than $24m in 2014.

In Winning, Newman played a racing car driver, a role which spurred his interest in the sport. He went on to take part in the 24-hour Le Mans race.

Before giving him the watch, Woodward had it engraved with the words "Drive Carefully, Me." He had been injured in a motorbike accident in 1965.

Woodward bought him a new watch in 1984, and he gave the Daytona Rolex to his daughter's then-boyfriend, James Cox.

Cox put the watch up for auction, and some of the proceeds will go towards the Newman's Own Foundation, the charity set up by Newman in 2005 that receives all the profits from his Newman's Own food range.