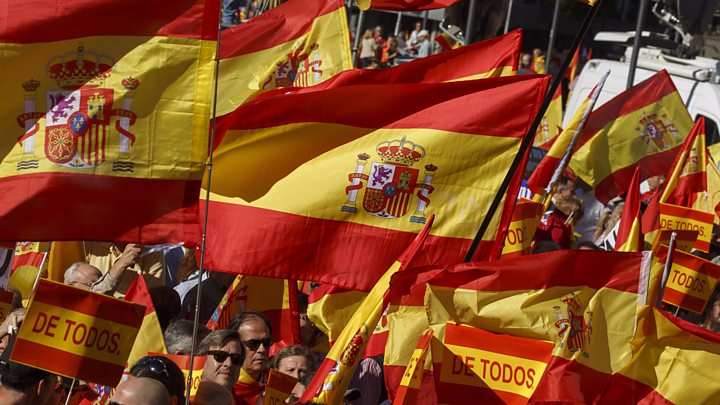 The Spanish government has said it would welcome the participation of sacked Catalan leader Carles Puigdemont in new elections.

The central government in Madrid has ordered that fresh elections for the regional parliament of Catalonia should take place in December.

It stripped Catalonia of its autonomy after the Catalan parliament voted to declare independence.

He condemned the suspension of Catalonia's autonomy and promised to continue to "work to build a free country".

Spain has been gripped by a constitutional crisis since an independence referendum, organised by Mr Puigdemont's separatist government, was held earlier this month in defiance of a ruling by the Constitutional Court which had declared it illegal.

Prime Minister Mariano Rajoy then announced the dissolution of the regional parliament and the removal of Mr Puigdemont as Catalan leader, and ordered that fresh regional elections should be held.

The political crisis will also be played out on the football pitch in the afternoon when Real Madrid, the defending Spanish champions, travel to Catalonia to play Girona, the team supported by Mr Puigdemont.

What are the latest developments?

Saturday saw the government in Madrid remove Catalonia's autonomy and take over government functions in the region.

A central government spokesman in Madrid, Íñigo Méndez de Vigo, said Mr Puigdemont had the right to continue in politics, despite his removal from office.

"I'm quite sure that if Puigdemont takes part in these elections, he can exercise this democratic opposition," he said, quoted by Reuters.

"The Catalans will be able to say what they feel about what they've been seeing in this last year, with all sorts of failing the law, abusing the law and putting themselves outside the law," he added.

He spoke after Mr Puigdemont, in a pre-recorded address to Catalans on Saturday afternoon, said the central government's actions were "premeditated aggression" that ran "contrary to the expressed will of the citizens of our country, who know perfectly well that in a democracy it is parliaments that choose, or remove, presidents".

He added: "We continue persevering in the only attitude that can make us winners. Without violence, without insults, in an inclusive way, respecting people and symbols, opinions, and also respecting the protests of the Catalans who do not agree with what the parliamentary majority has decided."

A poll published by Spanish national newspaper El Pais on Saturday suggests more Catalans (52% to 43%) are in favour of the dissolution of the regional parliament and the holding of elections.

What powers did Catalonia have?

There have been pro-unity demonstrations, with protesters in Barcelona waving Spanish flags and denouncing Catalan independence.

He ignored warnings by the Madrid government to cancel the move, prompting Mr Rajoy to threaten to remove Catalan leaders and impose direct rule.

Catalonia is one of Spain's richest, most distinctive regions, with a high degree of autonomy.

Many Catalans feel they pay more to Madrid than they get back, and there are historical grievances, too, in particular Catalonia's treatment under the dictatorship of General Franco. But Catalans have been divided on the question of independence.

Are you in Catalonia? What is your reaction to the latest developments? You can share your views and experience by emailing [email protected].