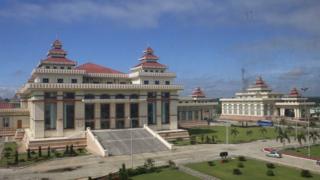 Myanmar police have charged two foreign journalists and two Burmese with breaking import laws after they flew a drone near the country's parliament.

They are being held in custody until their first hearing and could face up to three years in jail.

The Malaysian and Singaporean were working for Turkish broadcaster TRT.

Tension has been rising between Myanmar and Turkey over the Rohingya crisis, in which more than 600,000 people have fled Rakhine state for Bangladesh.

Security guards spotted the journalists flying the drone near parliament buildings and pagodas in the capital Naypyidaw, state media reported.

Lau Hon Meng from Singapore and Mok Choy Lin from Malaysia have been detained since Friday.

Their interpreter, Burmese journalist Aung Naing Soe, and their driver were also detained.

A police spokesman said the journalists had "illegally imported the drone".

TRT said it was in discussions with Myanmar authorities to secure their release.

The Ministry of Foreign Affairs has informed the Singapore and Malaysian embassies about the journalists' detention, state media said.