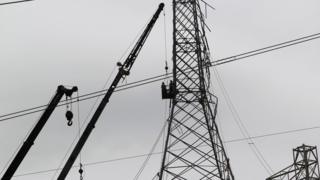 Puerto Rico's governor has called for the cancellation of a contract given to a tiny Montana firm to help rebuild the island's power grid.

Ricardo Rossello also said he wanted to see repair teams brought from New York and Florida to aid with reconstruction efforts in the wake of Storm Maria.

The contract was given to Whitefish Energy, which has little experience of work on such a scale, without a public bid process.

Several inquiries are under way.

More than 70% of people on the US-controlled island were without power as of Sunday morning – more than five weeks after the powerful hurricane devastated the power grid.

Mr Rossello said on Sunday he had asked the board of governors of the Puerto Rican Electric Power Authority (Prepa) to cancel the Whitefish contract.

"There can be no distraction to alter the commitment to restore the power system as quickly as possible," he said.

The governor said he had instructed Prepa to "immediately coordinate with the states of Florida and New York to reinforce brigades" that are currently rebuilding the grid on the island.

Concerns were raised about why Puerto Rican authorities had not requested "mutual aid" from other public power authorities, as is typical during disasters in the US.

The White House and the Federal Emergency Management Agency (Fema) distanced themselves from the deal late last week.

The company has its headquarters in the town of Whitefish, the hometown of US Interior Secretary Ryan Zinke. Mr Zinke has denied any involvement or wrongdoing.

Whitefish has said that it secured the $300m (£228m) deal in a legitimate manner.

The company did not immediately respond to a BBC request for comment on the governor's statement.

Prepa also did not immediately return a request for comment on the latest developments.

Earlier this week, Fema denied allegations by Prepa, the US territory's main utility, that it had reviewed the deal.

In a statement on Thursday, Fema said: "Any language in any contract between Prepa and Whitefish that states Fema approved that contract is inaccurate."

Fema also said it had "significant concerns" with how Prepa had procured the contract and had "not confirmed whether the contract prices [were] reasonable".

It is unclear what will happen to any outstanding costs.

Walt Green, a former director of the US National Center for Disaster Fraud, told BBC News earlier this week that it was "impossible" to say at this stage who was responsible for costs.

They later said there was "nothing illegal" about the contract.

On Friday, top Democrats from that panel and the Transportation and Infrastructure Committee sent a letter asking the Department of Homeland Security's inspector general to launch an investigation.