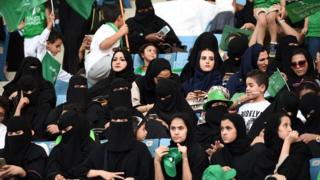 Saudi Arabia will allow women to attend sports events in stadiums for the first time from next year, officials say.

Families will be able to enter the stadiums in three major cities – Riyadh, Jeddah and Dammam.

It is another move towards giving more freedom to Saudi women, who face strict gender segregation rules, and follows the historic lifting of a driving ban.

Saudi Arabia's sports authority said that preparations would start in the three stadiums so they can be "ready to accommodate families from early 2018".

Restaurants, cafes and monitor screens would be set up inside the stadiums as part of the changes, it added. Up until now, the venues have been men-only areas.

The reforms are in line with a wide-ranging plan announced by 32-year-old Prince Mohammed to bring social and economic change to the oil-dependent kingdom, known as Vision 2030.

Last month, a royal decree said that women would be allowed to drive for the first time from next June. Concerts are once again being held and cinemas are expected to return soon.

On Wednesday, Prince Mohammed said that the return of a "moderate Islam" was key to his plans to modernise the country.

He said that 70% of the Saudi population was under 30 and that they wanted a "life in which our religion translates to tolerance".

But analysts warn that the plan is not without risks.

The kingdom faced a backlash from conservatives on social media after allowing women to participate in National Day celebrations in Riyadh's King Fahd Stadium for the first time last month.

Despite the recent announcements, women still face severe restrictions in the country, which enforces a strict form of Sunni Islam known as Wahhabism.

Women have to adhere to strict dress codes and must not associate with unrelated men. If they want to travel, work or access healthcare they must be accompanied by – or receive written permission from – a male guardian.