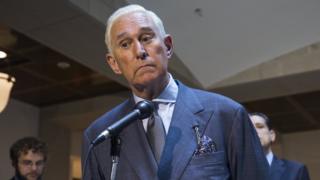 Roger Stone, a high-profile supporter of Donald Trump, has been suspended from Twitter after using the network to attack journalists.

Mr Stone, who advised Mr Trump during his election campaign, said he had been told he had violated Twitter's rules.

His suspension came hours after he used abusive and homophobic language to target journalists, including a gay CNN presenter, Don Lemon.

Twitter has not commented or confirmed if Mr Stone's suspension is permanent.

He was an aide to President Richard Nixon in the 1970s and became a political consultant. He says in the Netflix documentary Get Me Roger Stone that he got Mr Trump to run for president.

While he acted as an adviser during the early days of the Trump campaign, he left his role in disputed circumstances in August 2015 – Mr Stone says he quit, Mr Trump says he was fired.

Since then, Mr Trump has tried to put some distance between himself and Mr Stone, who regularly appears on network television to support his former employer.

Over several hours on Saturday, Mr Stone took to Twitter to attack CNN and New York Times journalists over their reporting.

His attacks came hours after CNN reported that the first charges had been laid by a grand jury in the investigation into Russian influence on the 2016 election.

In an interview with entertainment website The Wrap, he said he had hired "one of the best telecommunications lawyers in the country" and would sue Twitter, but it is not clear whether there are legal grounds to do so.

"I have been inundated on Twitter with bloggers threatening to kill me, my wife my kids and even my dogs yet Twitter seems unconcerned about that," he said.

One of the people he targeted on Saturday, CNN contributor Ana Navarro, said she did not sympathise with Mr Stone over his suspension.

Boo-hoo.
Can you hear me playing my little violin for him????? https://t.co/WOfRIBVplC