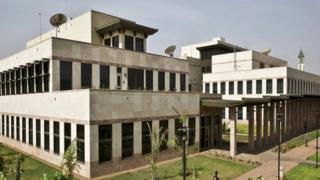 US Navy Seals 'investigated for murder over Mali army death'

Two elite members of the US Navy are being investigated for murder after a 34-year-old special forces serviceman was found dead in Mali in June, officials have told US media.

Army Staff Sergeant Logan J Melgar, from Texas, was found at US embassy housing in Mali on 4 June.

Reports in US media suggest officials believe the officer died of asphyxiation after being strangled.

No-one has been charged in connection with the death.

US forces have been deployed to the country to help with counterterrorism.

The Army's Criminal Investigation Command reportedly investigated the death for months after a coroner ruled his cause of death was homicide caused by strangulation, according to the New York Times.

The newspaper said the death was only passed on to the Naval Criminal Investigative Service in September. They said the organisation refused to comment on ongoing investigations.

The officers being investigated are reportedly from the Navy's elite Seal Team Six – the same unit which carried out the mission that killed al-Qaeda leader Osama bin Laden.

US media said the dead soldier's family declined to comment on the reports.