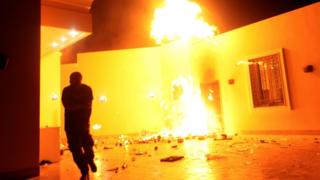 Benghazi attack: US captures man in Libya over 2012 raid

US forces have captured a man accused of involvement in the 2012 attack on an American compound in the Libyan city of Benghazi, President Donald Trump said.

Mustafa al-Imam was seized in Libya, the president said in a statement.

Mr al-Imam is facing charges including murder. The US ambassador and three other Americans died in the incident.

She was secretary of state when the compound was targeted in September 2012.

Attorney General Jeff Sessions said Mr al-Imam would "face justice in federal court for his role in the attack". Another suspect, Ahmed Abu Khattala, is already on trial in the US.

A Republican-led House Select Committee investigation published in 2016 found no evidence of wrongdoing by Ms Clinton.

The attack nonetheless haunted her presidential campaign and was cited frequently by Mr Trump as he called for her to be jailed.

Mr al-Imam has been charged with murder, as well as providing material support to terrorists and discharging a firearm in the course of a violent crime, the US Attorney's office said.

Ambassador Christopher Stevens and a state department technician died of smoke inhalation when armed men set fire to a building in the diplomatic compound.

Prosecutors said Mr al-Imam was in the process of being transported to the US.

Defence lawyers for Mr Abu Khattala allege that his 13-day voyage to the US was dragged out to restrict his access to legal counsel. Prosecutors deny the allegation.