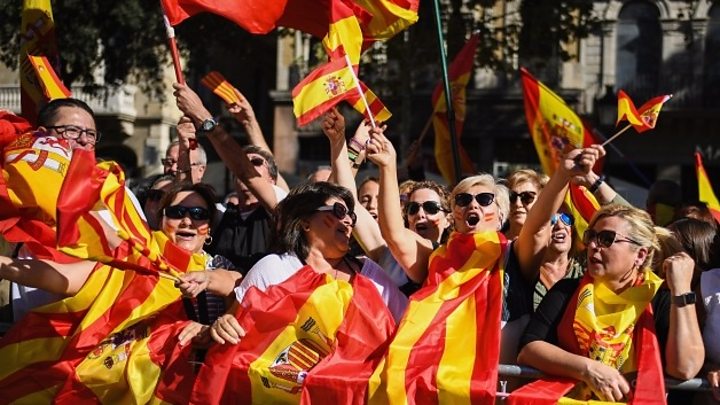 Catalonia independence: Puigdemont 'could run if not in jail'

Spain's foreign minister has repeated his government's position that the sacked Catalan leader could run in new elections in December, but stressed that meant only if he was not in jail.

Carles Puigdemont was removed from office after Madrid stripped Catalonia of autonomy for declaring independence.

Spain's chief prosecutor is preparing to file criminal charges against Mr Puigdemont and other Catalan officials for breaching Spanish law.

This could possibly happen as soon as Monday, the first working day since the independence declaration and the Spanish counter-measures.

Mr Puigdemont has said he does not recognise the order from Madrid removing him from power.

Mr Dastis told Sky News: "We are not taking autonomy away from Catalonia. We are just re-establishing it, in fact."

Meanwhile, Interior Minister Juan Ignacio Zoido has written to all police officers in Catalonia asking for their loyalty as a "new era" begins in the region.

He reminded members of the regional police, who are now under direct control from Madrid, of their duty to obey orders and to guarantee "the rights and liberties of all".

The BBC's Sarah Rainsford, in Madrid, says arresting Mr Puigdemont is likely to spark protests – and is perhaps one of the reasons why the interior minister has written this letter.

Senior police officers have told the BBC that they have already complied with an order to remove framed photographs of the sacked leader from police stations across the region.

Prime Minister Mariano Rajoy then announced the dissolution of the regional parliament and the removal of Mr Puigdemont as Catalan leader, and ordered that fresh elections should be held on 21 December.

Belgium's Migration Minister Theo Francken has said the separatist leader could be given asylum protection which Spain would find difficult to reverse.

He had been expected to attend a football match in Girona, the heartland of the pro-independence movement, which saw the local team beat Real Madrid – who Mr Rajoy supports – by 2-1. But he apparently did not make an appearance.