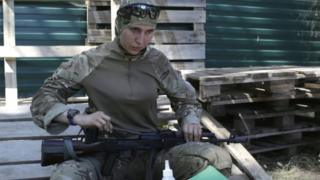 A Chechen man accused of plotting to kill Russian President Vladimir Putin has been injured and his wife killed in an attack near Ukraine's capital Kiev.

Adam Osmayev "was wounded but will live" after a car he was in was shot at, Ukrainian Interior Ministry adviser Anton Herashchenko said.

In 2012, Russian officials said Mr Osmayev was suspected of being part of a plot by Islamists to kill Mr Putin.

Russian media reported at the time that the plotters were planning to plant mines on Kutuzovsky Avenue in Moscow, used by Mr Putin on a daily basis.

Russia later asked Ukraine to hand over Mr Osmayev – but the authorities in Kiev refused to do so, saying they wanted to wait until the European Court of Human Rights considered his appeal against extradition.

In June, he survived an assassination attempt in Kiev. The attacker was then shot and wounded by Mrs Okuyeva.

The couple are well-known figures in Ukraine, after fighting as volunteers for Ukraine's military against pro-Russian rebels in the east of the country.

No-one has so far claimed responsibility for Monday's attack.

It comes less than a week after a Ukrainian lawmaker was injured in a vehicle bombing in Ukraine's capital.

A bodyguard of Ihor Mosiychuk and another person were killed in the blast.

Mrs Okuyeva once worked for him as an adviser.

Kiev has in recent years seen a number of deadly attacks on high-profile politicians and journalists.