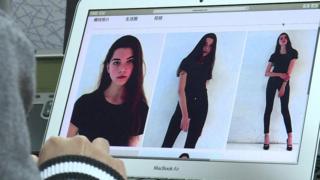 A Chinese modelling agency has denied claims that a Russian teenage model it represented died from overwork.

Vlada Dzyuba, 14, died in China on Friday after participating in Shanghai Fashion Week.

Her Shanghai-based agency, ESEE Model Management, said she was a happy young girl who enjoyed her modelling work.

Many foreign models in China are from the former Soviet Union. China has laws that allow children under the age of 16 to work in certain industries.

According to reports, Vlada began feeling dizzy and fell sick and was taken to a Shanghai hospital on Wednesday. She died on Friday from multiple organ failure after her condition quickly worsened.

The Chinese Global Times state newspaper said she died of blood poisoning. The Siberian Times, an English-language newspaper in Russia, alleges that the teenager, from the Russian city of Perm, died of meningitis.

It says that this was compounded by exhaustion following "a gruelling fashion show in Shanghai".

Carrie Fang, the chief agent for ESEE who was at Vlada's side when she died, said the young Russian had enjoyed the two months she spent in China before her death.