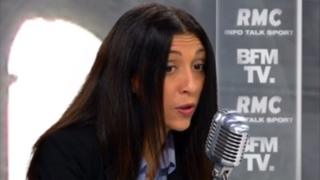 French prosecutors are investigating allegations by two women who say they were raped by Tariq Ramadan, a renowned Islamic scholar and Oxford professor.

One of them, Henda Ayari, told a French TV interviewer that Mr Ramadan had assaulted her in a Paris hotel in 2012.

"He literally pounced on me like a wild animal," she said.

In a Facebook post Prof Ramadan denied the accusations, calling them "a campaign of lies", and said his lawyer was suing the women for "slander".

Ms Ayari used to wear the Islamic full-face veil but is now a secular feminist activist.

Many women worldwide have shared accounts of sexual harassment using the Twitter hashtag #MeToo. In France the equivalent is #balancetonporc, meaning "expose your pig".

Ms Ayari had previously published an account of an alleged assault in a book, without naming the man.

Speaking on BFMTV, she said she had gone to Mr Ramadan's hotel room to ask him questions about Islam and at the time "I admired him very much".

Referring to the alleged rape, she said "he kissed me really hard… then for a few seconds he choked me, I really thought I was going to die".

When does flirting become sexual harassment?

Me too: I was sexually harassed at 11

The second woman – a convert to Islam – has alleged that she was raped by Tariq Ramadan in a hotel in Lyon in 2009.

Mr Ramadan denounced the allegations as "a campaign of slander clearly orchestrated by my long-time adversaries".

He is a controversial and influential figure among Muslim scholars. He challenges fundamentalist Islam, but some critics accuse him of promoting political Islam.

A Swiss national, he is the grandson of Hassan al-Banna, who founded the Muslim Brotherhood.

Since 2009 he has been professor of contemporary Islamic studies at St Antony's College, Oxford. He has also sat on a UK Foreign Office advisory group on freedom of religion.

IcetruckOctober 30, 2017
Like story:
tweet
Spacey under fire after sex assault claim
7 Early Warning Signs Your Kidney Aren’t Working As Well As They Should