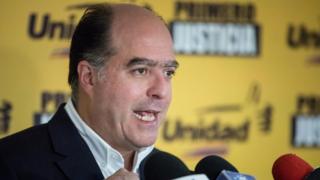 Three leading Venezuelan opposition parties have said they will not take part in December's municipal elections.

Leaders from the Justice First, Popular Will and Democratic Action parties say the electoral system is biased.

Julio Borges, the leader of the Justice First party and president of the National Assembly, said the government of Nicolás Maduro had rigged elections in 2013 and earlier this month.

The deadline for enrolling mayoral candidates for the 10 December vote expired on Monday.

Rather than fight another vote, the opposition coalition "should try to secure reforms to the electoral board", said Mr Borges.

Party members who enrol as candidates would be expelled from its ranks, he said.

"We will continue fighting for fair elections," he said. "Other dictatorships have fallen because of people's demands for a free vote."

Mr Maduro said the opposition was acting out of self-interest.

"When they lose, they denounce fraud. And when they know they are going into an election in an unfavourable position, instead of fighting they pull out," he said.

The governing Socialist Party, which has been in power since 1999, won gubernatorial elections in 18 of Venezuela's 23 states on 15 October.

The outcome of the elections and Mr Maduro's insistence that all new governors bow to the controversial constituent assembly have caused a rift among members of the opposition coalition, the Democratic Unity Roundtable (MUD).

They said the results were fraudulent.

He disagreed with the decision by four newly elected opposition governors to pledge allegiance to the constituent assembly, convened by Mr Maduro earlier this year.

Mr Capriles said that he "would not be part" of the opposition MUD "because it is not unified as a concept or a vision".

"It is just some people that grab the bones that are thrown to them," he said.