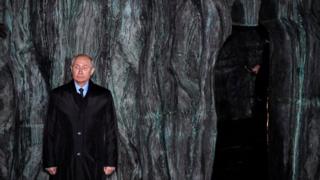 At least 750,000 people were executed and millions deported or imprisoned under Stalin's rule from the 1920s to the 1950s in the Soviet Union.

Mr Putin said seeing the era clearly would help "prevent it being repeated."

But critics accused him of continuing political repression and "crushing civil freedoms".

A group of dissidents from the Soviet era wrote to a news website that they considered the event to be "untimely and cynical".

The artist behind the Wall of Grief piece, Georgy Frangulyan, told the BBC that the memorial was not "normal, representative art" but "an expression of feelings, of fear and alarm".

The work is made up of jagged human forms with no faces, and shaped like a scythe.

At the opening ceremony, Mr Putin said: "An unequivocal and clear assessment of the repression will help to prevent it being repeated."

"This terrible past must not be erased from our national memory and cannot be justified by anything."

Last year, the UK Foreign Office reported a "crackdown on civil society" in Russia. A spokeswoman for Russia's foreign ministry said the report was not objective.

Under his rule, the Soviet victory over the Nazis has become central to a new ideology of Russian greatness.