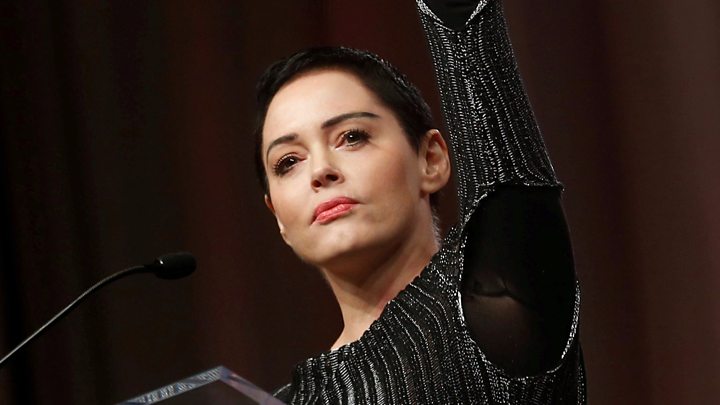 An arrest warrant has been issued in the US for the actress Rose McGowan for possession of a controlled substance.

It follows an investigation into belongings left on a United Airlines flight from LA to Washington Dulles airport in January.

The belongings reportedly belonged to McGowan and had traces of a controlled substance.

The authorities say they have been trying to contact McGowan so she can appear in court in Virginia.

McGowan, 44, is among the most prominent accusers of Harvey Weinstein, the Hollywood mogul facing multiple allegations of sexual assault and harassment.

Writing on Twitter on Monday, Ms McGowan hit out at the arrest warrant, asking "Are they trying to silence me?"

McGowan has accused Weinstein of raping her at the Sundance Film Festival in 1997. She received a $100,000 (£76,000) settlement after the incident, according to a New York Times report.

Through a spokesperson, Weinstein has denied any non-consensual sexual acts.

According to the New York Times, someone approached Ms McGowan's lawyer in September to offer $1 million in exchange for her signature on a nondisclosure agreement regarding Weinstein's conduct.

She told the Times she countered with a request for $6 million, but withdrew the counter-offer when the newspaper published allegations against Weinstein from several women.

UK police said on Tuesday they were investigating sexual assault allegations against Weinstein from seven women between the 1980s and 2015.

New York police are also investigating claims against the 65-year-old, including rape and sexual assault.

Numerous allegations have been made against the movie mogul by women including actresses Angelina Jolie, Mira Sorvino and Gwyneth Paltrow.