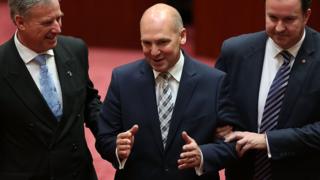 Australia's Senate president has revealed he could be a dual citizen, meaning he may join five others in becoming ineligible for office.

Stephen Parry, who is part of the government, may have inherited UK citizenship through his father.

Politicians with dual citizenship cannot be elected in Australia.

Mr Parry has said in a statement that he will resign from his position if his citizenship is confirmed by the British Home Office.

On Friday, a court ruled that five politicians – including Deputy Prime Minister Barnaby Joyce – were wrongly elected because of the constitutional rule.

"In the event that I am found to hold British citizenship… I believe the High Court has made it abundantly clear what action is required," Mr Parry said on Tuesday.

Mr Parry's role as Senate president is to preside over Australia's upper house, mirroring the role of the speaker in the lower House of Representatives.

A replacement for Mr Parry would be chosen through a recount of votes from last year's election.

If forced to resign, he would be the first member of either the major Liberal and Labor parties to be claimed by a saga that has captivated Australian politics since July.

Mr Joyce and Fiona Nash, the other government member disqualified on Friday, are members of the Nationals, the junior coalition partner.

Mr Joyce's disqualification last week means Prime Minister Malcolm Turnbull is effectively deadlocked 74-all in the lower house, because the speaker – a government MP – will not vote.

Mr Turnbull will rely on non-government MPs to pass legislation there until at least 2 December, when he learns if Mr Joyce will return through a by-election.