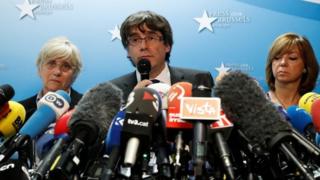 Catalonia's sacked President Carles Puigdemont says he has not travelled to Belgium to seek asylum.

He has appeared in public in Brussels with several colleagues after declaring independence from Spain last week.

Mr Puigdemont said he was not trying to escape justice but wanted to be able to speak freely.

He was speaking at a press conference as Spain's constitutional court suspended the declaration of independence made by the Catalan leader on Friday.

Mr Puigdemont also said he would accept the result of snap Catalonia elections on 21 December, which were called by Spain's central government after it invoked Article 155 of the constitution, temporarily suspending the region's autonomy.

The move will see as many as 150 of the region's top officials replaced.

The Spanish government has previously said he was welcome to take part in the fresh polls.

The ousted Catalan leader did not clarify how long he would stay in Belgium, but said he would return once he was given "guarantees" by the Spanish government.

He said moves by the Spanish chief prosecutor to charge him and a number of other cabinet members with offences that carry up to 30 years in prison showed the extent of the central authorities' aggression.

Earlier comments from a lawyer hired by Mr Puigdemont in Brussels had fuelled speculation that he was investigating asylum processes there.

When asked on Flemish public radio whether he was seeking asylum, Paul Bekaert said: "We're keeping all options open – nothing has been decided."

"It would be surprising if he were granted asylum in the current circumstances," he told Spanish radio.

He emphasised that Mr Puigdemont had yet to be charged and was therefore still "free to move around".

But he added: "We believe that among EU member states, there is a level of reciprocal trust over the fact that we are states governed by the rule of law."

Five of Mr Puigdemont's sacked ministers have joined him in Belgium:

The crisis began when the Catalan government held an independence referendum, despite a Constitutional Court ruling declaring it illegal.

The Catalan authorities said that of the 43% of potential voters who took part, 90% were in favour of independence. Others boycotted the vote after the court ruling.

IcetruckOctober 31, 2017
Like story:
tweet
Doctor approves of ill inmate sitting up during execution
‘I didn’t realise it was going to be part of my entrapment’