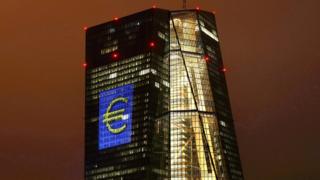 The eurozone's economy grew by 0.6% in the three months to September, above analysts' expectations, according to EU statistics office Eurostat.

Last month, the European Central Bank (ECB) raised its 2017 growth forecast for the 19-nation eurozone to 2.2%, the fastest in 10 years.

The overall message from these figures reinforces the picture of a eurozone economy that is, at last, gaining some strength. It's a reasonably good growth figure and the gradual decline in unemployment continues.

That said, the jobless numbers are still high, painfully so in some countries. And inflation remains too low, at least in the view of the European Central Bank.

The problem (or one of them) with very low inflation is that it's harder for a central bank to respond effectively if there is an economic downturn.

So, much as the ECB will welcome the growth picture, it will continue its efforts (ultra-low interest rates and "quantitative easing") to get prices rising a bit faster for some time to come.

The agency estimated that inflation in the eurozone had fallen to 1.4% in October, down from 1.5% in September.

That puts it well below the 2% inflation target set by the European Central Bank.

Separate figures for the French economy show it grew 0.5% in the three months to September.

INSEE said consumer spending in the country increased by 0.5% in the third quarter, after a 0.3% rise in the previous quarter. Investment went up by 0.8%, after a 1% increase in the second quarter.

Meanwhile, figures issued by the Greek statistics service Elstat showed that Greece's economy returned to growth in the first three months of 2017.